DataHub takes a schema-first approach to modeling metadata. We use the open-source Pegasus schema language (PDL) extended with a custom set of annotations to model metadata. The DataHub storage, serving, indexing and ingestion layer operates directly on top of the metadata model and supports strong types all the way from the client to the storage layer. 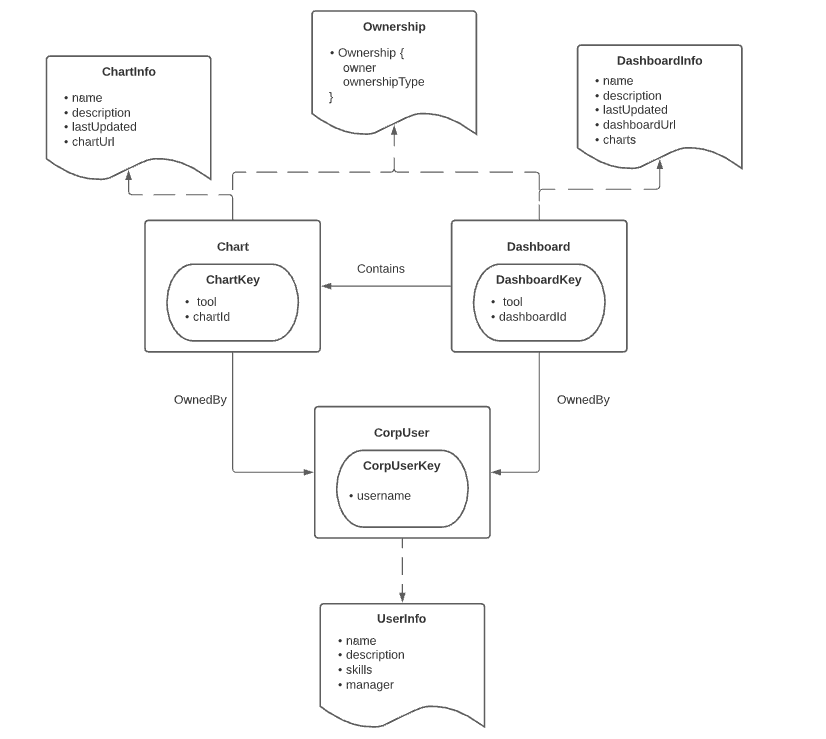 DataHub's "core" Entity types model the Data Assets that comprise the Modern Data Stack. They include

See the Metadata Modeling/Entities section on the left to explore the entire model.

Where are Entities and their aspects defined in DataHub? Where does the Metadata Model "live"? The Metadata Model is stitched together by means of an Entity Registry, a catalog of Entities that comprise the Metadata Graph along with the aspects associated with each. Put simply, this is where the "schema" of the model is defined.

Traditionally, the Entity Registry was constructed using Snapshot models, which are schemas that explicitly tie an Entity to the Aspects associated with it. An example is DatasetSnapshot, which defines the core Dataset Entity. The Aspects of the Dataset entity are captured via a union field inside a special "Aspect" schema. An example is DatasetAspect. This file associates dataset-specific aspects (like DatasetProperties) and common aspects (like Ownership, InstitutionalMemory, and Status) to the Dataset Entity. This approach to defining Entities will soon be deprecated in favor of a new approach.

As of January 2022, DataHub has deprecated support for Snapshot models as a means of adding new entities. Instead, the Entity Registry is defined inside a YAML configuration file called entity-registry.yml, which is provided to DataHub's Metadata Service at start up. This file declares Entities and Aspects by referring to their names. At boot time, DataHub validates the structure of the registry file and ensures that it can find PDL schemas associated with each aspect name provided by configuration (via the @Aspect annotation).

By moving to this format, evolving the Metadata Model becomes much easier. Adding Entities & Aspects becomes a matter of adding a to the YAML configuration, instead of creating new Snapshot / Aspect files.

To explore the current DataHub metadata model, you can inspect this high-level picture that shows the different entities and edges between them showing the relationships between them.

To navigate the aspect model for specific entities and explore relationships using the foreign-key concept, you can view them in our demo environment or navigate the auto-generated docs in the Metadata Modeling/Entities section on the left.

For example, here are helpful links to the most popular entities in DataHub's metadata model:

Generating documentation for the Metadata Model​

There are three supported ways to query the metadata graph: by primary key lookup, a search query, and via relationship traversal.

New to PDL files? Don't fret. They are just a way to define a JSON document "schema" for Aspects in DataHub. All Data ingested to DataHub's Metadata Service is validated against a PDL schema, with each @Aspect corresponding to a single schema. Structurally, PDL is quite similar to Protobuf and conveniently maps to JSON.

Querying an Entity by primary key means using the "entities" endpoint, passing in the urn of the entity to retrieve.

For example, to fetch a Chart entity, we can use the following curl:

This request will return a set of versioned aspects, each at the latest version.

As you'll notice, we perform the lookup using the url-encoded Urn associated with an entity. The response would be an "Entity" record containing the Entity Snapshot (which in turn contains the latest aspects associated with the Entity).

DataHub also supports fetching individual pieces of metadata about an Entity, which we call aspects. To do so, you'll provide both an Entity's primary key (urn) along with the aspect name and version that you'd like to retrieve.

For example, to fetch the latest version of a Dataset's SchemaMetadata aspect, you would issue the following query:

DataHub supports an API for fetching a group of Timeseries aspects about an Entity. For example, you may want to use this API to fetch recent profiling runs & statistics about a Dataset. To do so, you can issue a "get" request against the /aspects endpoint.

For example, to fetch dataset profiles (ie. stats) for a Dataset, you would issue the following query:

You'll notice that the aspect itself is serialized as escaped JSON. This is part of a shift toward a more generic set of READ / WRITE APIs that permit serialization of aspects in different ways. By default, the content type will be JSON, and the aspect can be deserialized into a normal JSON object in the language of your choice. Note that this will soon become the de-facto way to both write and read individual aspects.

A search query allows you to search for entities matching an arbitrary string.

For example, to search for entities matching the term "customers", we can use the following CURL:

The notable parameters are input and entity. input specifies the query we are issuing and entity specifies the Entity Type we want to search over. This is the common name of the Entity as defined in the @Entity definition. The response contains a list of Urns, that can be used to fetch the full entity.

A relationship query allows you to find Entity connected to a particular source Entity via an edge of a particular type.

For example, to find the owners of a particular Chart, we can use the following CURL:

The notable parameters are direction, urn and types. The response contains Urns associated with all entities connected to the primary entity (urn:li:chart:customer) by an relationship named "OwnedBy". That is, it permits fetching the owners of a given chart.

There are a few special aspects worth mentioning:

Keys can be created from and turned into Urns, which represent the stringified version of the Key record. The algorithm used to do the conversion is straightforward: the fields of the Key aspect are substituted into a string template based on their index (order of definition) using the following template:

By convention, key aspects are defined under metadata-models/src/main/pegasus/com/linkedin/metadata/key.

A CorpUser can be uniquely identified by a "username", which should typically correspond to an LDAP name.

Thus, it's Key Aspect is defined as the following:

and it's Entity Snapshot model is defined as

Using a combination of the information provided by these models, we are able to generate the Urn corresponding to a CorpUser as

Imagine we have a CorpUser Entity with the username "johnsmith". In this world, the JSON version of the Key Aspect associated with the Entity would be

and its corresponding Urn would be

The BrowsePaths aspect allows you to define a custom "browse path" for an Entity. A browse path is a way to hierarchically organize entities. They manifest within the "Explore" features on the UI, allowing users to navigate through trees of related entities of a given type.

To support browsing a particular entity, add the "browsePaths" aspect to the entity in your entity-registry.yml file.

By declaring this aspect, you can produce custom browse paths as well as query for browse paths manually using a CURL like the following:

Please note you must provide:

There are 2 "types" of Metadata Aspects. Both are modeled using PDL schemas, and both can be ingested in the same way. However, they differ in what they represent and how they are handled by DataHub's Metadata Service.

Versioned Aspects each have a numeric version associated with them. When a field in an aspect changes, a new version is automatically created and stored within DataHub's backend. In practice, all versioned aspects are stored inside a relational database that can be backed up and restored. Versioned aspects power much of the UI experience you're used to, including Ownership, Descriptions, Tags, Glossary Terms, and more. Examples include Ownership, Global Tags, and Glossary Terms.

Timeseries Aspects each have a timestamp associated with them. They are useful for representing time-ordered events about an Entity. For example, the results of profiling a Dataset, or a set of Data Quality checks that run every day. It is important to note that Timeseries aspects are NOT persisted inside the relational store, and are instead persisted only in the search index (e.g. elasticsearch) and the message queue (Kafka). This makes restoring timeseries aspects in a disaster scenario a bit more challenge. Timeseries aspects can be queried by time range, which is what makes them most different from Versioned Aspects. A timeseries aspect can be identified by the "timeseries" type in its @Aspect annotation. Examples include DatasetProfile & DatasetUsageStatistics.

Timeseries aspects are aspects that have a timestampMillis field, and are meant for aspects that continuously change on a timely basis e.g. data profiles, usage statistics, etc.

Each timeseries aspect must be declared "type": "timeseries" and must include TimeseriesAspectBase , which contains a timestampMillis field.

Timeseries aspect cannot have any fields that have the @Searchable or @Relationship annotation, as it goes through a completely different flow.

Please refer to DatasetProfile to see an example of a timeseries aspect.

Because timeseries aspects are updated on a frequent basis, ingests of these aspects go straight to elastic search ( instead of being stored in local DB).

You can retrieve timeseries aspects using the "aspects?action=getTimeseriesAspectValues" end point.

Being able to perform SQL like group by + aggregate operations on the timeseries aspects is a very natural use-case for this kind of data (dataset profiles, usage statistics etc.). This section describes how to define, ingest and perform an aggregation query against a timeseries aspect.

The timeseries aspects can be ingested via the GMS REST endpoint /aspects?action=ingestProposal or via the python API.

Performing an aggregation on a Timeseries aspect.​

Aggreations on timeseries aspects can be performed by the GMS REST API for /analytics?action=getTimeseriesStats which accepts the following params.

We support three kinds of aggregations that can be specified in an aggregation query on the Timeseries annotated fields. The values that aggregationType can take are:

We support two types of grouping for defining the buckets to perform aggregations against:

The API returns a generic SQL like table as the table member of the output that contains the results of the group-by/aggregate query, in addition to echoing the input params.

For more examples on the complex types of group-by/aggregations, refer to the tests in the group getAggregatedStats of ElasticSearchTimeseriesAspectServiceTest.java.